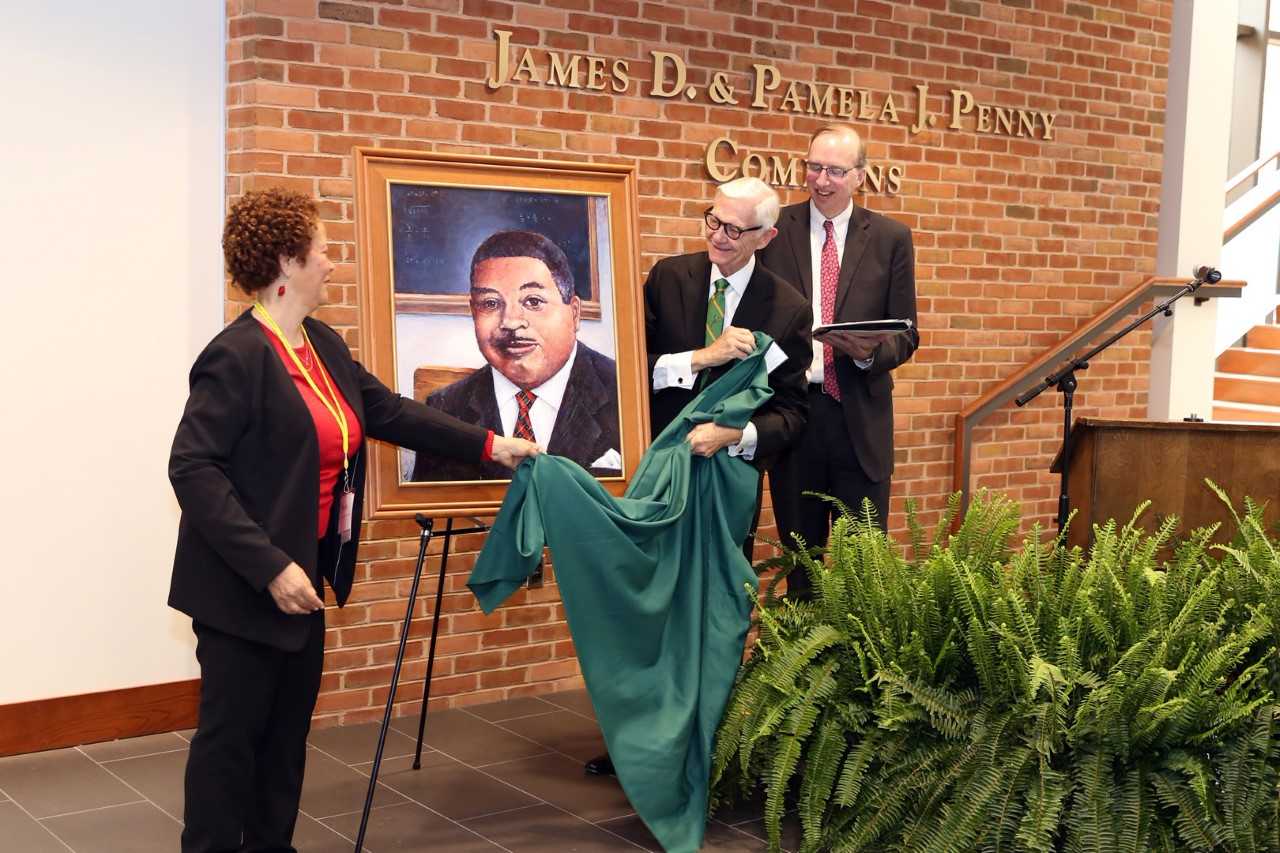 
Sankofa. It’s a word in the Twi language of Ghana that translates as “go back and get it,” and represents the need to reflect on the past to build a successful future.

That theme was greatly in evidence at William & Mary Law School on Feb. 23-24 as the school hosted its second African-American Law Alumni Celebration.

As they did in 2014 during the inaugural celebration, alumni returned to reconnect with classmates and remember their time at the law school. In so doing, they forged ties with current students, looking back and sharing their wisdom so that the current student body can move forward powerfully.

Barbara L. Johnson ’84, a member of the William & Mary Board of Visitors who co-chaired the weekend celebration with Latoya Asia ’09, shared details about Mr. Travis’ life with the gathered crowd.

“Edward Travis was one of those hidden figures in African-American history who has now come to light in a very powerful way,” Johnson said. “He is an unsung hero we will now recognize and who will be spotlighted in the history of the Marshall-Wythe Law School, as it says in the [William & Mary] Charter, for all times coming.”

Johnson described Travis (1911-1960) as a life-long educator and a successful businessman who built a legacy rooted on service. As the only African-American law student in the early, segregated 1950s, he was not allowed to live on campus and had no support group to make him feel welcome. Still, he persisted.

“We thank you, Edward Augustus Travis, for your vision, for your courage, for your perseverance, and for your legacy of service,” Johnson said. “We stand on your shoulders.”

What followed over the next day and a half was a jam-packed series of lunches, panels and dinners. During his keynote remarks at the alumni dinner, Chief Judge Roger Gregory of the U.S. Court of Appeals for the Fourth Circuit singled out the substantive agenda and great number of law leaders in attendance.

“There are some serious William & Mary law alumni here,” he said to the delight of the audience.

Earlier that afternoon, The Honorable Carla N. Archie ’95, Superior Court Judge for the 26th Judicial District of North Carolina provided an inspiring keynote talk about excellence during the welcome luncheon, after which she answered questions from the audience. Dean Douglas also honored Judge Wilford Taylor Jr. ’78, who recently retired from the Hampton Circuit Court after 32 years, for his career and his ongoing service teaching at the law school .

Subsequent panels included alumni and experts considering a “View from the Bench”; “Career ‘Alternatives’ to the Traditional Practice of Law”; and “Fighting for FREEdom: A New Era for the First Amendment?”

The next morning began with a CLE Session on “The Future of the Practice of Law,” followed by panels on “Making a Case for Pro Bono” and “A Candid Conversation on the African-American Law Student Experience at William & Mary (Sankofa).”

The panels concluded with lunch and a special presentation in recognition of Wilson C. Jefferson ’72, for whom the Black Law Students Organization chapter is named. Jefferson spoke by Skype from Saudi Arabia, where he works as a senior counsel. BLSA President Jada Moss ’19 and a number of former BLSA presidents honored him.

That evening saw the 23rd annual Oliver Hill Scholarship Banquet, with a keynote from Oliver Hill Jr., and many networking opportunities for BLSA students with alumni.

The reunion also helped mark the 50th anniversary of African-Americans in residence at William & Mary. During the 2017-18 academic year, the university is undergoing a series of special events, guest speakers and artistic performances, as well as honoring its first African-American undergraduate residential students: Lynn Briley, Janet Brown and Karen Ely of the Class of 1971.

“As reunions go, this one will have been one of intergalactic caliber,” said President Reveley during the dinner.