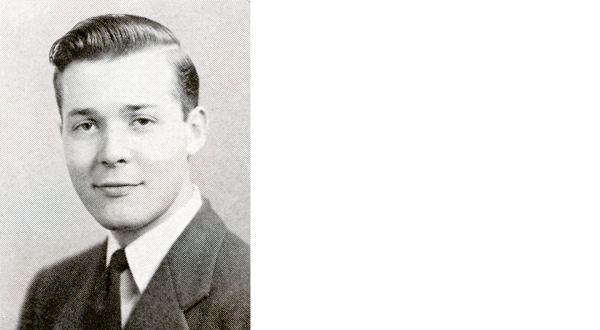 When Harmon Hoffman ’49 first came to William & Mary in 1942, World War II was far from his mind. Little did he know that, when Uncle Sam came calling just a year later, he would find himself fighting under Gen. George Patton in one of the most infamous battles of the entire conflict.

Growing up in Bridgewater, Va., the son of a Methodist preacher, Hoffman says that national and global events didn’t really touch his world. Although he, along with his parents and four siblings, lived through the ravages of the Great Depression, he says it wasn’t a topic of conversation.

“There were certain things we knew we had to do without and there wasn’t much money for weekend or going dancing,” he says. “It was a simple living.”

After graduating from high school, Hoffman came to William & Mary, via an admissions process far different from the one students face today.

“My mother, bless her, wrote letters to various colleges to find out the possibilities for me, and one of them was William & Mary,” he says. “ I was working in the local general store the summer after high school when a gentleman appeared, stuck out his hand and introduced himself as being from the College. Not long after that, I made arrangements.”

Within a few weeks, Hoffman was settled in Williamsburg and enrolled in the War Work Plan, a program that allowed him to work on various war-related projects in exchange for the cost of his room and board. Despite the war raging abroad, his first year of college passed with little fanfare, although he did notice that young men were in short supply and were quietly disappearing from the campus—the only hint of upheaval in an otherwise typical student experience.

“The war was something I heard of, but really didn’t know much about,” says Hoffman.

The summer after his freshman year, he received notice from the draft board and within weeks of beginning the fall semester, he was off to basic training at Fort Benning in Georgia. Trained as a medic, he was shipped off to France in August 1944, less than 2 months after the U.S. and her allies stormed the beaches of Normandy on D-Day. There, his infantry unit watched over a group of prisoners of war captured in the fighting in Normandy. Within months, his unit was reassigned to Gen. George Patton’s 3rd Army as the Allies prepared for their final push into Nazi Germany. He arrived just in time to participate in one of the most significant battles in the European Theatre.

“They gave us the Battle of the Bulge for Christmas that year,” says Hoffman.

In one particularly harrowing instance, Hoffman recalls he and a fellow soldier struggling to carry a wounded man on a stretcher to an aid station behind the front lines.

“The Germans were operating 88 mm guns on mobile units called “half-tracks,” so they could take a few shots and move on. The trick was figuring out where they were going,” Hoffman says. “We were crossing a small stream that had a high bank on one side, and we could hear the shells firing in our direction. One hit close and I knew the next one would hit the bank behind us. I was right.”

Hoffman shouted “Incoming Mail!,” the signal infantrymen used to indicate incoming fire, as the shell hit directly behind the three men. His training at Fort Benning saved his life—he instinctively pressed himself down into the bank with his helmet against his neck as dirt and shrapnel fell around him. Although the wounded man on the stretcher survived, the man carrying the other end of the stretcher did not. He spent a couple of nights in the dirt, in the coldest winter on record, before heading to the aid station. There, the medic p romptly declared Hoffman thoroughly frostbitten and whisked him off to England to recuperate.

By the time he was fit to return to duty, the war was over. In the year after peace, he was sent to the Sudetenland, an area on the border between Germany and Czechoslovakia, to keep peace between the large German population and the Czechs. He finally came home in the spring of 1946.

Hoffman, who re-enrolled at William & Mary shortly after returning home, graduated in 1949, and subsequently got married and had four children, said he did not have any trouble readjusting to civilian life back in the States.

“It wasn’t hard for me to go to war, and nothing changed for me,” he says. “I love my country.”