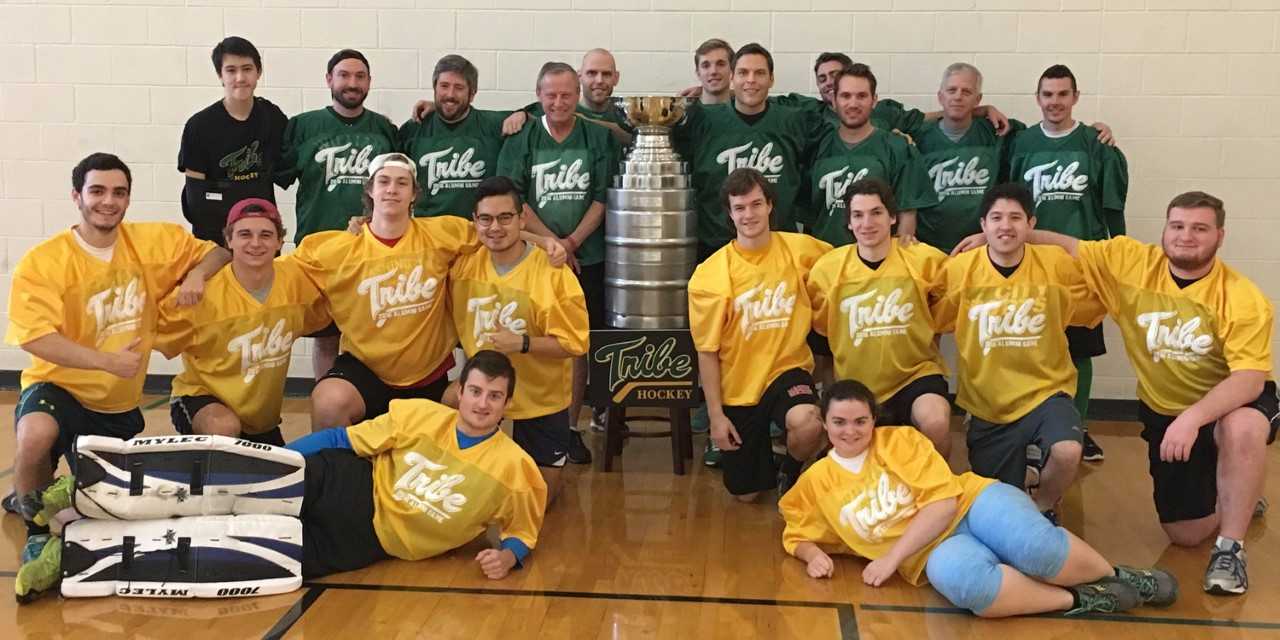 
There’s no shortage of opportunities this Homecoming & Reunion Weekend to catch up with old friends. In recent years, I’ve enjoyed watching the Homecoming Parade, going to Friday night’s Virginia Uncorked party in the Sunken Garden, Saturday’s Harrison Avenue Tribe Tailgate, the football game and the Saturday Night Bash dance party under the big tent. There are dozens of other events going on around campus.

We played an alumni game years ago at our home ice rink in Yorktown but realized we could get a better turnout if we played floor hockey in the basement of the Rec Center, which is equipped with hockey boards.

The Homecoming series is tied right now, so there’s pressure on alumni to field a solid team to compete against a much younger and faster group of students who will show us no mercy.

Other than bragging rights, both sides are vying to win the Philip E. Morris Memorial Cup, named after the team’s first head coach. The 3-foot-tall, 50-pound steel trophy is a dead ringer for the NHL’s Stanley Cup — with a few modifications. We constructed it last year out of a half-barrel keg, two cake pans, a punch bowl and a gallon of steel polish.

Phil Morris was my head coach, and some of my fondest memories at William & Mary are from when I played on the team and later coached with him. Like any club sport trying to survive from year to year, we faced a lot of challenges.

Back in those days, we sometimes had just enough players to take the ice after an eight-hour road trip and would then have to stay in a shabby motel. We were put on probation following a game against the University of Virginia for our on-ice antics straight out of the movie “Slap Shot.” We lost money on every fundraising idea and couldn’t pay the rink on time. But Coach Morris believed in us, and Campus Recreation Director Linda Knight gave us a second chance to redeem ourselves.

Despite all of those challenges, we still found time to have fun and occasionally win. The good news is that the team has learned from our past mistakes and is now thriving with a whole new generation of leadership. We even won the league championship a few years ago.

So if you’re on campus on Saturday at 11 a.m., drop by the Rec Center to say hi and stick around to see alumni take back the Morris Cup. We’ll be celebrating the victory afterwards in the Kaplan Arena parking lot, and as a matter of superstition, only those who win may drink from the cup of glory.