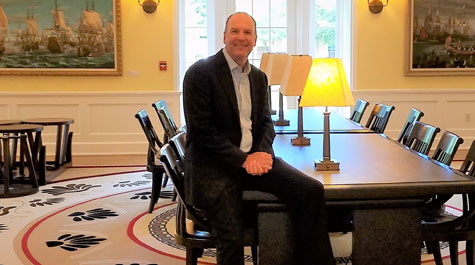 
Why we do what we do when holiday shopping

Whether looking online or standing in store aisles, it’s the time of year when each decision results in cha-chinging the cash register.

Holiday shopping is upon us, and one faculty member at William & Mary’s Raymond A. Mason School of Business has looked closely at how we make those choices.

Kurt Carlson came to Mason in August as the new associate dean for faculty and academic affairs. He is an expert in consumer and behavioral research, having spent the last eight years at Georgetown University’s McDonough School of Business where he was a professor and director of the Georgetown Institute for Consumer Research, as well as co-director of McDonough’s behavioral research lab.

For the past three years, Carlson did a series of reports on holiday spending. He found that:

“This is sort of the big takeaway from our three years of doing this: They go shopping because it’s for the holidays; they’re doing their Christmas shopping. But while they’re out shopping they buy electronics for themselves,” Carlson said.

As far as impulse buying, the end cap display in a retail store is one of the most powerful draws for a shopper who wasn’t planning to buy something until it was right in their path of travel, he said.

The impulse itself has been studied in the context of buyer’s remorse being repeated despite it creating a bad feeling.

“My dissertation was all on understanding people’s motivations and multiple motivations,” Carlson said. “Now some views of human cognition say that you have a goal, it’s active or it’s not. And when it’s active, it’s being pursued by behavior. That’s how you infer that it’s active.

“My view is that you have hundreds of goals active at different levels simultaneously.”

A short-term goal of treating oneself may win out over a long-term goal. For example, buying and eating a cupcake repeatedly despite feeling bad afterward each time.

“And it’s because at this moment in time, the goal to be healthy or the goal to lose weight is less active than this goal to take care of one’s self, to treat oneself,” Carlson said.

Carlson has focused his research specifically on how people make decisions, and he’s found some surprises.

“Most of my consumer research is on how people process information on their way to making a choice,” Carlson said. “Most of that has focused on the way that an early preference that emerges from just a tiny little bit of information can influence the way we seek out new information, and the way that we evaluate that information when we receive it.”

Two general concepts have come out of his academic research efforts.

One is that when a consumer has a preference for a particular brand over another in a choice process, the person will bias the information so that it is seen as subjectively favoring the brand he or she likes better. This happens even when both brands are totally new to the consumer, and the preference is based on a small piece of information encountered early in the search process. New information is seen as being biased towards favoring the early leader.

Curiously, consumers also will seek out every bit of negative information possible about their favored choice, wanting to know the worst possible problem to see if they can discount it.

Carlson’s studies on how consumers considered buying open-boxed items that had been returned showed that if consumers knew why the item was returned, even if it was for an extreme reason such as the original buyer saying it didn’t work, they were more likely to buy it and to pay more for it.

Consumers, trying to avoid being pressured into buying something they don’t really like, tend to hide their preferences, Carlson said. But they will reveal them indirectly if asked, for example, which of two political candidates they’d like to read a negative news story about — the one they choose is 75 percent of the time the one they’re leaning toward.