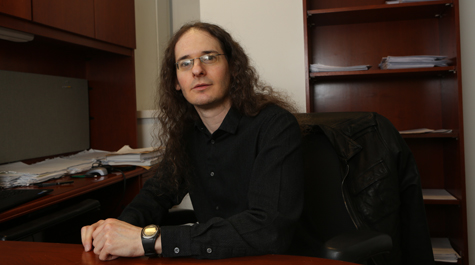 Familiar tune: Brian Rabinovitz is a neuroscientist who focuses on how the brain processes music. His specialty is memory, what makes us remember songs and what makes some songs impossible to forget. Photo by Stephen Salpukas


It starts with a small jump up, then back down, a major second followed by a major sixth. Sol - la - sol - mi, sol - la - sol - mi. Whether sung by Mariah Carey or Dean Martin, the four notes are instantly recognizable as the opening to “Silent Night.”

“You hear it in one key, you hear it in another key, you know it's the same melody -- just in different keys,” said Brian Rabinovitz. “That’s because you have a memory for that particular tonal structure. You are able to instantly recognize it, even if it’s in a key you've never heard before, sung by a singer you haven't heard before.”

Rabinovitz is a neuroscientist who focuses on how the brain processes music. He’s currently serving as a visiting lecturer in William & Mary’s Department of Psychological Sciences and will be teaching a course on musical cognition this spring.

His specialty is memory, what makes us remember songs and what makes some songs impossible to forget. Specifically, he studies how our brains get information from music, store that information and make sense of it.

“There are areas in the brain’s prefrontal cortex that are tracking melodic structures independently of individual notes,” Rabinovitz said. “Once a particular melodic structure is tracked, it can essentially be saved as a memory.”

When we hear a song for the first time, our brain searches an entire catalog of musical structures it’s been building ever since we first listened to music. The neuroscience behind enjoying that new music, Rabinovitz explained, is based on our catalog, whether we can predict patterns in the new music that align with musical structures we already have stored.

“Typically, the music that's very niche, that's less popular, is stuff that is really challenging and doesn’t give you those resolutions you expect,” Rabinovitz said. “Then you look at Christmas music, or almost any pop song, you get very clear resolution. It goes exactly where you expect.”

And the more that music is played, the more those expectations are enforced. It’s why popular music stations rotate through a series of top 40 hits. Why mainstream lyrics often contain only a few words. Why the same holiday classics inundate American airwaves each year. Anything that repeats a lot, Rabinovitz said, has a greater likelihood of making it into our musical structure memory bank.

“That pleasurable reaction only increases as you hear further repetitions,” Rabinovitz said. “Hearing something you know very well, you already have strong expectations. You’re making these predictions, having this moment of tension and then realizing the prediction was correct.”

Even when a musician takes liberty with a familiar song by adding their own variation, as long as they stay within predictable patterns, the listener will still experience pleasure by guessing what will come next, Rabinovitz said. Our brains are hardwired to find satisfaction in charting patterns, even if they’re a little different than what we have heard before -- and that sense of satisfaction is primal.

“That area of the brain you might see active for the pieces you're liking, that’s the same place you see active when you engage in any reward-inducing behavior, like using addictive drugs,” Rabinovitz said. “The phrase ‘sex, drugs, and rock n roll’ could be seen a describing a lifestyle -- or simply a checklist of stimuli that activates this reward circuit.”

The circuit that neuroscientists connect to pleasure and reward is called the mesolimbic pathway. The earliest humans relied on the mesolimbic system to reward them with a hit of the neurotransmitter dopamine when they found food or located a mate. Such reinforcement ensured their survival. When it comes to today’s music, that same region of the brain is activated when we hear a song we like.

“Of course, not everybody has an equal love for ‘Jingle Bells,’” Rabinovitz said. “Our processing doesn't take place in a vacuum. You have additional associations that get activated when you are exposed to a piece of music.”

Rabinovitz was a musician long before he became a scientist. He played trombone in a symphonic band in high school. Now he considers himself primarily a guitarist, who dabbles with bass and keyboard. In 2001, he put his musical skills to work in service of science and started graduate school, studying behavioral neuroscience at American University.

For a study published in 2008, Rabinovitz composed a series of songs to test how people react to terrible music. He asked 32 American University students to respond to hearing “good” musical selections before “bad” ones or “bad” selections before “good” ones, to gauge how exposure to one thing influences perception of another – a term known as hedonic contrast.

For the “good” music, Rabinovitz composed melodies with Western harmonies, full of major thirds and perfect fifths. The “bad” music he designed to have arrhythmic sequences of notes made up of dissonant intervals, diminished and minor seconds.

“What we tend to perceive as pleasant tends to have clear mathematical structures,” Rabinovitz said. “We like even multiples.”

If a frequency of one note is 200 hertz, our brains want to pair that note with something at 400 hertz, Rabinovitz explained. To counteract that desire for order, he composed music that contained intervals played at the smallest distance we can hear as separate notes.

“It was actually very easy,” he said. “A lot of people do it even when they're not trying to.”

In the spring semester, Rabinovitz will provide W&M students a deeper look into music and memory through his course "Neuroscience of Musical Cognition.” He says the focus will be on giving students a clear picture of musical processing, so they can understand how their brains respond to music.

“The goal is to give people a better appreciation for the amazing complexity and depth of what is going on when you're engaging in a process that seems so natural and effortless,” Rabinovitz said.