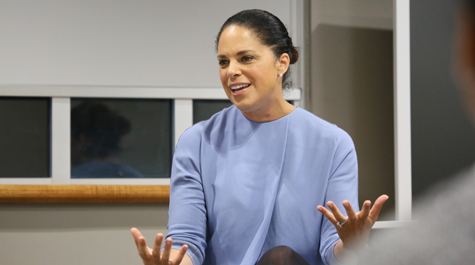 
God is in the details when it comes to storytelling, Soledad O’Brien, the 2017 Hunter B. Andrews Fellow in American Politics, told an audience of William & Mary students during a 45-minute question-and-answer session Tuesday at Swem Library.

Later that night, she presented a lecture on diversity to an overflow audience in the Sadler Center’s Commonwealth Auditorium. Her visit to campus was part of the university’s 50th anniversary commemoration of the first African-American residential students, which is being observed with special events and programming throughout the 2017-18 academic year.

The Hunter B. Andrews Fellowship in American Politics was created in 1998 by friends of the former state senator and William & Mary alumnus, who died in 2005. He also served on the William & Mary Board of Visitors from 2003 to 2005. Andrews graduated from W&M 76 years ago.

An award-winning journalist and documentarian, O’Brien has worked for NBC News, CNN, HBO, Al Jazeera-America, PBS NewsHour and MSNBC, among others. In 2010, she wrote a critically-acclaimed memoir, The Next Big Story: My Journey through the Land of Possibilities, which chronicled her biggest reporting moments and how her upbringing and background influenced these experiences.

She is the founder and CEO of Starfish Media Group, whose declared mission is “uncovering and investigating empowering stories that look at the often divisive issues of race, class, wealth, poverty and opportunity through personal narratives.”

Talking with film and media studies students Tuesday, O’Brien explained that focusing on the potentially numbing minutiae of life can add untold depth to their storytelling.

“I did a story once on a young man who’d gotten out of prison,” she said. “The challenge he had was he was only able to get jobs that paid $10 an hour. So we were trying to show what it’s like to be out of prison without opportunity.”

A producer went in ahead of O’Brien and did a cursory interview with the man that barely scratched the surface of his challenge. She stepped in.

“What you need to see is him opening his cabinet, and when he does it’s just full of mac ‘n cheese, because you get them for two for a dollar,” she said. “So that’s what his four kids would eat, every day. Mac ‘n cheese all the time.

“… You begin to see, to understand, the conundrum because you’re so deep into his life you understand all of the details. By the end of watching him walk you through his life, you’re like, ‘This guy is never going to make it,’ which by the end of our documentary, he didn’t.”

One of O’Brien’s current projects centers on campus food pantries.

“You really get to see what happens to someone from month to month,” she said. “They start the month with some money, but it’s not enough to get to the end of the month. By the 15th they start to figure what they’re going to pay for. By the 17th they’re just cutting back on food. By the 19th they’re going to every event because they can grab food that’s served at the reception.

During the far-ranging session, O’Brien challenged students to get out of their comfort zone. If they are showing their work only to friends and people who agree with them, they are missing a valuable opportunity to build an audience, she said. Ask someone you know doesn’t agree with you to watch your product. Once they’ve seen it, what did they like? What didn’t they like? Would they watch it again?

“The onus is on you to move into uncomfortable spaces and open up conversations that aren’t what you would necessarily think,” she said. “You might have to look at other perspectives on things.”

O’Brien’s father was Australian and her mother Afro-Cuban. Because interracial marriage was illegal in Maryland, they had to drive to Washington, D.C., to get married. Back in Maryland, they faced people spitting on them in the streets, and when they moved to New York, they had difficulty getting housing, according to a Hollywood Reporter article.

“You are going to face discrimination, everybody in this room,” O’Brien told the students. “There are going to be people who like you, people who hate you. For me, my strategy was both to understand it and to recognize the data that would tell me very clearly what the opportunities were for women like me in a newsroom.

“Every day you have to go, put on a good face, and do the stuff you want to do. This is in every industry. And I’m not going to let people’s casual racism, or sometimes just ignorance, or sometimes aggressive racism, or sexism, or whatever, stand in the way because they will.”