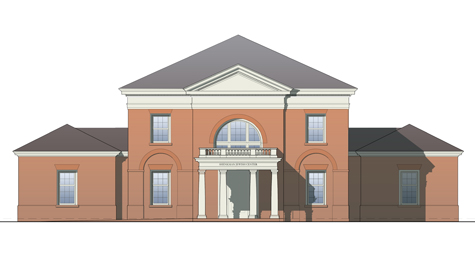 The William & Mary Real Estate Foundation and Hillel at William & Mary are pleased to announce the planned construction of a new facility that will serve as a gathering place for Jewish students to participate in a variety of cultural, spiritual, social and educational activities and programming. The facility will be named after generous benefactors, Mark R. Shenkman and Rosalind Shenkman, who bestowed a seven-figure gift to the university for this project. Groundbreaking for the new Shenkman Jewish Center will begin in January 2018, and it is expected to be completed in the fall of 2018.

The Shenkman family, who reside in Greenwich, Conn., are longtime history buffs. As a result, they have a strong desire to see William & Mary students in the nation’s colonial capital thrive by immersing themselves in a diverse and culturally enriching environment.

Mark Shenkman’s passion for history started as a young boy when his parents would take him to visit Williamsburg, and they would walk around William & Mary’s storied campus. He said this passion was strengthened when he was in the Army in the late 1960s and while stationed at Fort Lee, Va. — when he would often take short drives to visit the William & Mary campus — and only grew when his son, Gregory Shenkman, attended the College and graduated in the Class of 2003.

In many ways, the Shenkmans said, this passion is fueling the family's commitment to give back to a 324-year-old university such as William & Mary and serves as a foundation for them to drive positive change.

For many years, the Shenkmans wanted to make a meaningful contribution to William & Mary, which led the family, including their sons Greg ’03, Andrew and Justin, to put their heads together and come up with a way to provide enriching opportunities for students. This goal led to their vision to create the Shenkman Jewish Center.

For students practicing the Jewish faith, there has never been a dedicated space to gather for discussions or public debate, study with friends, celebrate holidays or eat weekly Shabbat dinners together. Now, with the addition of the Shenkman Jewish Center, this will all take place under one roof. The new facility will house a large meeting room, a study lounge, a kosher kitchen and a Sukkah among other amenities.

“There are numerous factors behind our decision to make a transformational gift to William & Mary. In addition to our love of American history — including William & Mary’s impressively long history — President Reveley has shown tremendous support and enthusiasm for this project,” said Mark Shenkman. "We also believe in Rabbi Gershon Litt’s vision for the Center and know that his leadership will pave the way toward a very successful future for Jewish students benefiting from all of the activities the Center will offer.”

The building will be owned and managed by the William & Mary Real Estate Foundation, which will work with the City of Williamsburg on granting a special use permit for the property. Founded in 2006, the W&M Real Estate Foundation is an independent non-profit corporation with the mission to acquire, manage, lease and develop properties in support of the education mission of the university. The Center will be operated by Hillel at William & Mary, under the leadership of Rabbi Gershon Litt, director of Hillel.

Shenkman added, “In my view, the Center will help attract talented Jewish students who might not have ever considered applying to William & Mary, which could lead to a larger pool of applicants for the school. In so many wonderful ways, this facility will strengthen the Jewish identity on campus.”

The new Shenkman Jewish Center will be approximately 3,000 square feet and will be located across the street from campus on the corner of Jamestown Road and Cary Street. Currently, the site is an undeveloped lot down the street from the Confucius Institute, the Christian Science Reading Room, Temple Beth El and the Wesley Foundation. The architectural design of the two-story facility will fit closely with the scope and character of the area and will feature a brick facade.

“William & Mary cares enormously that our students be part of a diverse, inclusive and welcoming environment, and physical space plays an important role. Mark and Rosalind are helping us take a major step forward in this realm through the marvelous center they are making possible,” said President Taylor Reveley. “This splendid gift provides the means for so many of our students to thrive in ways they have never been able to before and for that we are truly grateful."

The Shenkman Jewish Center will serve more than a gathering place for students; it will also serve a much larger purpose of strengthening and growing the local Jewish community and inspiring them to feel a greater sense of purpose both during and after their time at the university, according to Rabbi Litt.

“Mark and Rosalind are investing in the future of many young Jewish adults, empowering them to become future leaders wherever their paths may lead them,” said Litt. “The Shenkman Jewish Center will allow Jewish students at William & Mary to embrace who they are and have a place to call home when they’re on campus.”

A home away from home is just what the Shenkmans envision for the new Center, and they are eager for construction to begin so that students can take advantage of the extraordinary opportunities that will be provided.

"Just as our nation’s history has been shaped by William & Mary and its people, the university’s legacy continues to be shaped by the generosity of donors like the Shenkmans,” said Matthew T. Lambert ’99, vice president for university advancement. “Transformational gifts like this enable students to pursue their passions, deepen relationships and better connect with the community, their peers and the university. We are truly grateful."

Mark is the founder and CEO of Shenkman Capital Management, Inc., a high-yield asset management firm founded in 1985. Mark earned a BA degree in Political Science from the University of Connecticut in 1965 and graduated with an MBA from George Washington University in 1967. He has been a longtime supporter of William & Mary’s Raymond A. Mason School of Business, previously serving on the Business Foundation Board, of which he is now an emeritus member. For years, Mark has provided internship and career opportunities for William & Mary students at Shenkman Capital and meets with faculty at the business school frequently. He was inducted as an honorary alumnus of William & Mary in 2015. Rosalind received her undergraduate degree from New York University and earned her masters in social work from Fordham University.