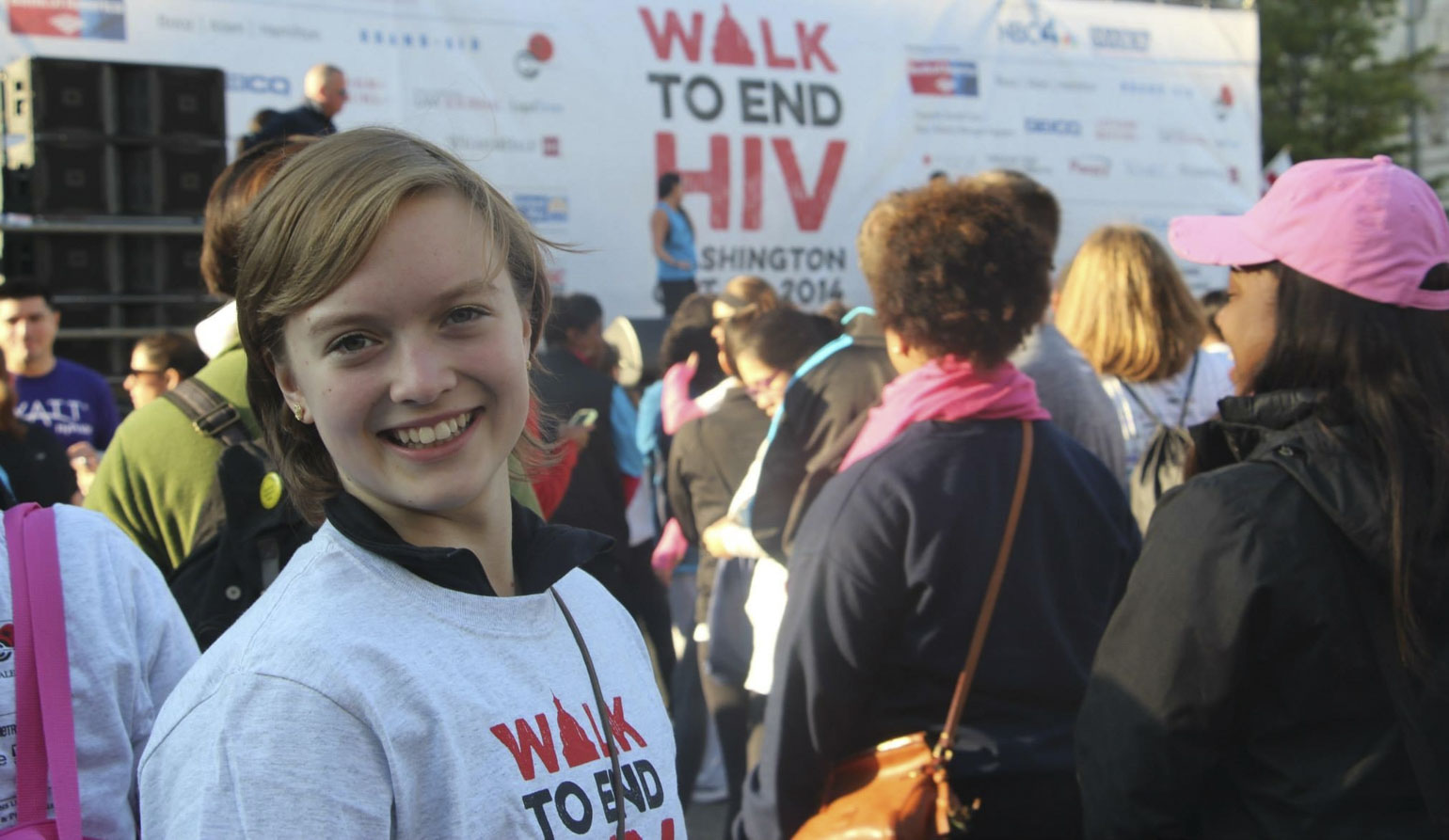 Lydia Boike ’18 met with me in Swem Aromas on a sunny Friday afternoon. She greeted me with a bright smile and cheerful eyes as she sat down while I set up my electronic devices for the interview. The first question I asked was about the specifics of her research: Boike studies Alzheimer’s disease in Professor Lisa Landino’s lab on campus. Immediately, Boike hit me with terms like “oxidative stress” and “respiration in glycolysis.” Silently, I thanked God for modern recording devices and vowed to give the scientific terms a Google later. Scholarships recipient Boike, a double chemistry and self-designed biology major, chatted on about disease mechanisms.

Boike, however, does not confine her research to the laboratory — hanging over a microscope or analyzing Excel spreadsheets late into the night. Instead, Boike recognizes the humanity behind the disease. In addition to her work with Professor Landino, Boike devotes time to a project at the Gardens at Warwick Forest, a continuing care retirement community in Newport News, Va. She works with Dr. Emmeline Gasink, the medical director and geriatrician of the Gardens at Warwick Forest. Her project uses music to promote interpersonal emotional connections among Alzheimer’s patients.

“We make a playlist of music we think the patients would enjoy based on their past preferences,” Boike says. “Every day, we have a volunteer or staff member listen to music with them, and it’s on an iPod, so they have that as their own personal iPod for however long they’re in the facility.”

After a year and a half of the program’s implementation, Boike has witnessed improvement among some of the patients. The music has a soothing effect on patients, which is particularly helpful for individuals who have difficulty communicating. “Often, individuals who cannot communicate verbally are unable to express the cause of observed agitation and pain. This leads to an increase in emergency room visits, which in turn, can cause unintended infections and increased stress.”

“Music is a great way of calming someone down so that you can sit down and ask them some very basic questions,” and it enables the staff to get at the root of the problem. “Maybe they’re not in the kind of pain that needs to go to the hospital, but something about what they’re wearing is really bothering them,” or they have a minor health issue that the facility itself can easily address, Boike says.

“One woman had started the program in spring 2015; she was completely non-verbal. Her husband visits every single day and eats lunch with her. She is very kind and sweet, but she never talks. One day, she turned and looked at her husband and said, ‘I know you from somewhere! You’re my husband, but you look really old!’”

Boike laughed as she reflected on the wife’s remarks about her husband’s appearance. Her compassion for the people who have the disease that she researches radiates through her ebullient telling of anecdotes and her willingness to share details about her research. The path to these rewarding moments, however, has not always been straightforward.

As she worked toward developing and implementing this program, Boike has used skills that she learned in her laboratory experience, both with Professor Landino, and in a summer experience working in Professor Paul Hergenrother’s organic synthesis lab at the University of Illinois at Urbana-Champaign.

“A lot of times in science, people want to find an answer,” she explains. “Most of the time, you don’t get that answer. You get a bunch of other pathways that you could go off and explore, but you’re not necessarily sure which of those pathways is going to lead you to the answer that you want.” During her summer research experience in particular, Boike realized the value of stepping away from a problem and approaching it later from a new perspective.

Working with individuals coping with dementia and Alzheimer’s requires this same problem-solving outlook. Boike began volunteering in nursing homes by playing the flute. While she was there, she noticed that many activities in which the residents participated involved playing cards or coloring, neither of which necessarily encourage deep emotional connections between the patients and the volunteers, especially for patients with limited mobility.

“They’re all activities that don’t really allow for the individual to create something of their own or to feel connected to other people in society in a productive manner,” Boike says.

Familiarity with the processes of Alzheimer’s disease enabled Boike to recognize that the activities available to residents were contributing to the patient's’ decline rather than exercising the functional parts of their minds.

“Alzheimer’s is something where your neurons are degrading, so you need to keep those pathways moving,” Boike says. “Having someone wave at you or having someone talk to you is super important because it uses those pathways that you want to keep maintained.”

With an eye on existing programs that fostered personal connection, Boike set to work developing the one currently in place at Warwick Forest — an extension of the larger Music & Memory national program. Since she has studied classical Indian dance for over a decade, Boike initially hoped to combine her passion for dance with her passion for science to understand Alzheimer’s. After meeting with Dr. Gasink at the facility, a William & Mary alumni and former student of pre-medical advisor Dr. Sher, the two decided on a music program. Because of her love for dance, Boike recognizes that music has the potential to reach deep emotional channels and foster connections between individuals, even in those no longer able to communicate.

“You can see when someone wants to get up and dance, and you can tell whether they’re happy or not. People sometimes listen to the music, and they cry,” says Boike of the responses to her program that she’s seen.

Discovering what type of music will elicit an emotional response, however, poses another set of problems.

“The biggest challenge for me is always finding ways to communicate with people who might not want to talk to me at first,” Boike says.

Boike sometimes struggles to overcome communication barriers that age differences present. The problem-solving scientist in Boike rescues her in these social situations: “People are like puzzles that you have to solve because sometimes the person isn’t going to come out directly and tell you what makes them happy.” One woman with whom Boike works enjoys telling others about the years that she and her husband have spent together. Boike tapped this capacity for loquacity through pinpointing a source of stress for this patient. “She gets very stressed because he [her husband] can’t always visit,” but she loves to tell Boike about her wedding and other memorable experiences that she and her husband have shared together.

In addition to Boike and other volunteers or staff members discovering what music might appeal to patients, Boike seeks to involve family members in the process.

“I understand the stress that family members have when visiting people with Alzheimer’s patients who may not remember who their family members are or important memories about them,” says Boike. “I am lucky because, as a volunteer, I can give family members a way to get involved in their loved one’s care at the facility.”

Presenting family members with the option to help select music gives them a concrete conversation topic and can re-open communication channels.

“Music is something that is universal," Boike says. "If you ask someone to select songs for a family member, they often are overjoyed that they can participate in shaping their loved one’s care. Remembering songs also brings back memories of the times they shared with the patient.”

The facility explains how staff and volunteers will integrate the music into the daily care that the patients receive and then invite family members to participate so that the patients can relive memories of road trips, caroling, or dancing in the kitchen together.

For Boike, family connection remains important in all aspects of Alzheimer’s, from assisting with care to understanding the disease itself. When Boike’s uncle received a diagnosis of frontotemporal lobe dementia, Boike noticed a lack of literature available to the public about Alzheimer’s other than what the Alzheimer’s Association has published. The lack of information and the overwhelming negativity surrounding the disease often paralyzes family members when a loved one receives an Alzheimer’s diagnosis.

“That leads to a perception of Alzheimer’s disease as a tragedy that robs a person of their identity and their place in the world. We often shuffle these individuals to the side, and blame the fact that there is no cure for the disease, without really looking into all the options. We need to do more for these patients so that they do not have to spend 10 years of their lives feeling alone.”

To combat the lack of information and increase awareness of effective programs like the one at Warwick Forest, Boike reads scientific articles about Alzheimer’s and breaks them down into digestible information. She is in the process of creating a blog geared toward those who have just received a diagnosis.

“You don’t have to have been involved in research to understand basic science,” she says, “and I think that there’s a lot more that we can do for people who have been diagnosed, and one of them is like giving them the science resources to understand the disease for themselves.”

This desire to understand the disease itself fits into Boike’s lab work with Professor Landino. The research Boike focuses on in Professor Landino’s lab characterizes how proteins involved in energy production are affected by Alzheimer’s specific conditions.

“Someone just really needs to do it,” says Boike of the work she’s helping conduct at William & Mary.

Boike’s brand of compassion for the individuals and family members who have received an Alzheimer’s diagnosis goes beyond sympathy. Her compassion enables her to use her talents to both help those in assisted-living facilities and their families in understanding the disease. William & Mary has enabled her to share these talents with others.

“Without Dr. Sher, who introduced me to Dr. Gasink, I wouldn’t have been able to get involved at all — at least in the facility where I am now,” Boike says of the advisor who put her in touch with the geriatrician at Warwick Forest.

“It’s really cool because now all of us [Boike, Dr. Sher, and Warwick Forest’s geriatrician] are basically all friends,” Boike says.

In addition to the connections and moral support, Boike has received financial backing from the campus community as well. United Against Inequities in Disease, a campus organization that focuses on local and national public health issues, has helped raise money for the iPods that the program requires, and members of the club have gone with Boike to volunteer at Warwick Forest. Through the Office of Community Engagement, Boike has received about $5,000 to help her pursue her project.

“It’s been super awesome in terms of the support that I’ve received from W&M,” she says. “I definitely don’t think that this project would’ve been so extensive had it not been for all of the funding that I got from the school and all the people who helped.”