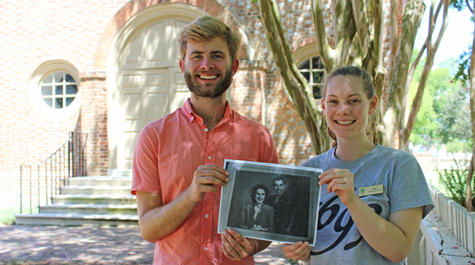 
Maybe it is their wedding photo. Maybe it was taken after they became engaged. Maybe they were on their way to their honeymoon and she was getting ready to toss the bouquet.

Who are these people ?

On either the night of July 31 or early the morning of August 1, someone slipped a photocopied picture of a smiling couple under the west doors of William & Mary’s Wren Chapel, the ones that face the Sunken Garden. Robert Watkins ’18 was assigned to open the chapel that day. The west doors are supposed to remain locked at all times, but when he has proctor duty Watkins checks them just to make sure. This day, laying face down, was the backside of an 8.5 by 11 piece of paper on which was scrawled “Married Here in 1947.”

“The age of the couple was the first thing that astonished me,” Watkins said. “Also, this seems like a very deliberate action. Whoever slipped the paper under the door had planned to leave it for us, since they had to print out the picture and bring it with them. It seems to me that maybe the couple — or their children — came to celebrate their 70th wedding anniversary.”