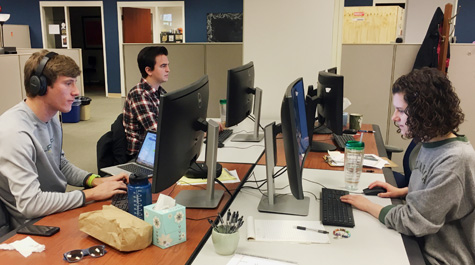 
Sitting at a work station in Swem Library’s digital lab, Connor Fenton ’17 combs through a digital copy of a 17th-century royal diary. Written by Queen Charlotte, the diary contains recordings of the baths her husband, King George III, has taken.

“I thought it was very interesting that she recorded these baths because she didn’t just mention that he had a bath, she documented how many baths and what time of day each occurred. It seemed odd that she was so preoccupied with his hygiene,” Fenton said.

It wasn’t until he saw the new BBC documentary, “George III – The Genius of the Mad King,” that he learned that the “baths” were not strictly for cleanliness, but considered a form of therapy for King George III’s mental issues.

“The documentary suggested that the baths were therapeutic, and that’s definitely one of the possibilities that make the most sense. I’m no expert on bathing culture, but it seems to be the implication she was going for, that the baths were for his health. That’s the beauty of history, that it is open to interpretation,” said Fenton.

These are the types of surprises that can be found in the treasure trove that is the Georgian Papers, royal documents from the Georgian monarchy held in the Royal Archives.

In spring 2015, William & Mary and the Omohundro Institute of Early American History and Culture partnered with the Royal Archives and King's College London on the Georgian Papers Programme (GPP). The GPP is a five-year project to make available online the historic manuscripts relating to the Georgian monarchy, by the year 2020. Most of these papers relate to George III, although papers from the reigns of George I, George II, George IV and William IV are also included.