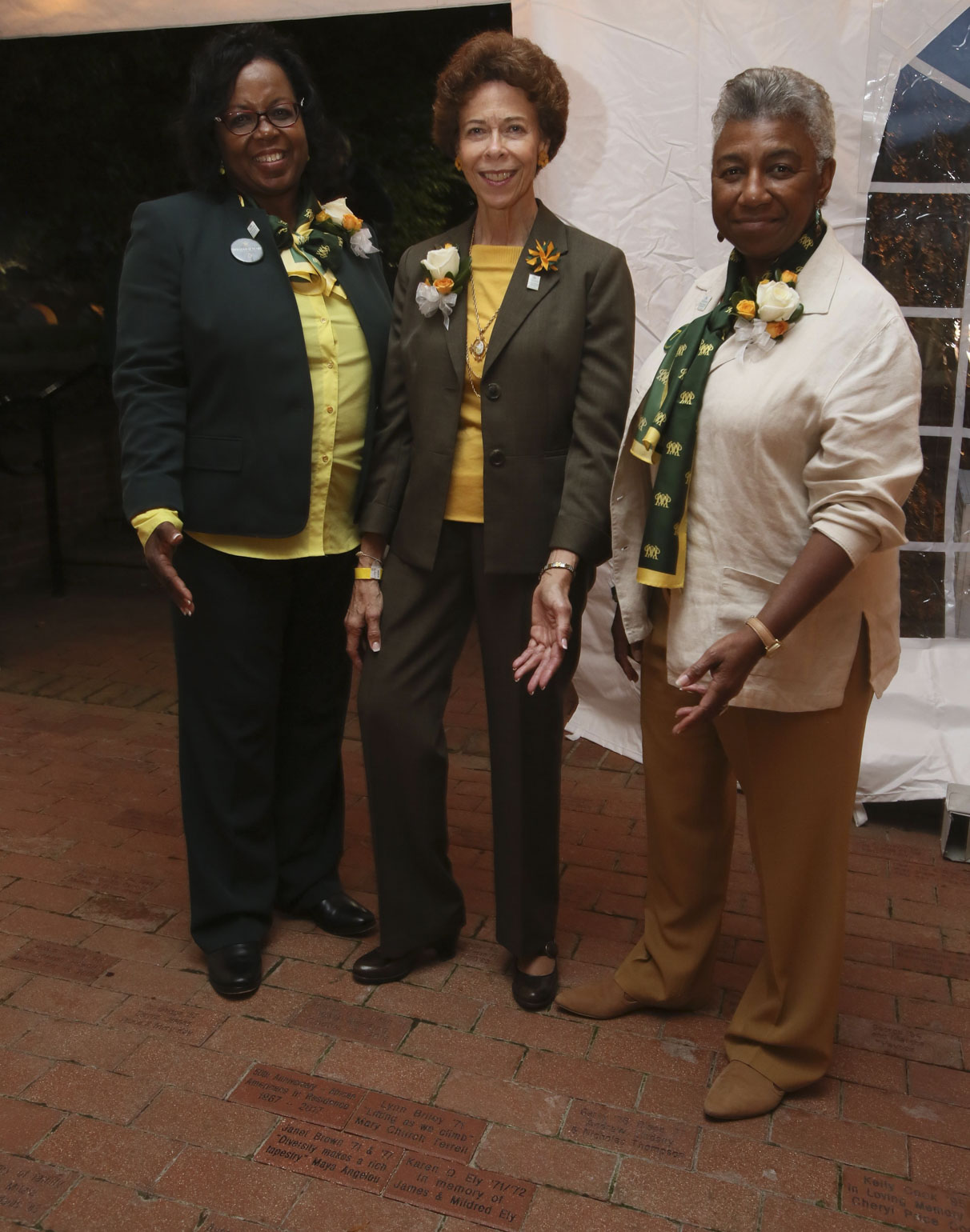 
On a warm, sunny Saturday morning of this year’s Homecoming & Reunion Weekend, William & Mary added further permanence to the legacy of Janet Brown Strafer ’71, M.Ed. ’77, Karen Ely ’71 and Lynn Briley ’71 – the university’s first three African-American students in residence. As part of a series of events throughout 2017-18 that both celebrate and commemorate the 50th anniversary of this milestone, each of the three alumnae was honored with a brick that now adorns Clark Plaza of the Alumni House for all to see.

Dr. Jacquelyn Y. McLendon, professor emerita and chair of the 50th Anniversary of African-Americans in Residence Committee, opened the brick dedication ceremony with a reminder of the word and theme which guides this year of commemoration; sankofa, a word which in the Akan Language of West Africa translates to, “Go back and get it.” This year is about knowing and understanding the past of our institution, so that we may better understand our future .

In the audience were, of course, Brown Strafer, Ely, and Briley — and President Taylor Reveley thanked the three women for being there in his remarks. Much of life, he noted, is about showing up. Since 1967, these three trailblazing women have shown up time and again when alma mater called upon them. President Reveley acknowledged that at times it surely was not easy and there were many times they must have felt lonely and excluded. However, they continued to show up. And because of their commitment to William & Mary, we are better, stronger and more diverse as an institution.

Finally, Provost Michael Halleran brought the ceremony back to sankofa by reminding us that memory is essential to identity, and remembering the sacrifice and bravery of Brown Strafer, Ely and Briley is an important and vital piece of William & Mary’s history. In fact, these alumnae have been on campus so often helping William & Mary honor its past that Provost Halleran joked he should be charging them tuition. But the debt, of course, goes the other way.

That was the question that the provost left the audience to ponder. Bricks, he argued, are solid, they are tough and they pass the test of time. Bricks are what connects this campus and bricks are the foundation that help us pave the way. In 1967, Brown Strafer, Ely and Briley showed up to campus. More than that, President Reveley emphasized, “They came. They stayed. They succeeded.” Because these three women came, stayed and succeeded in a time and a place not designed for them to do any of those things, more were able to follow in their footsteps. They laid a foundation for a new William & Mary, and we owe much of our future to their past.

The final thing about bricks? We don’t always notice how much we need them as we step across them, but just imagine if we tried to walk the William & Mary campus without them.

Try seeing how far we’d get.

For more information on the 50th Anniversary of African-Americans in Residence and upcoming commemoration events, click here. We hope you’ll join us.