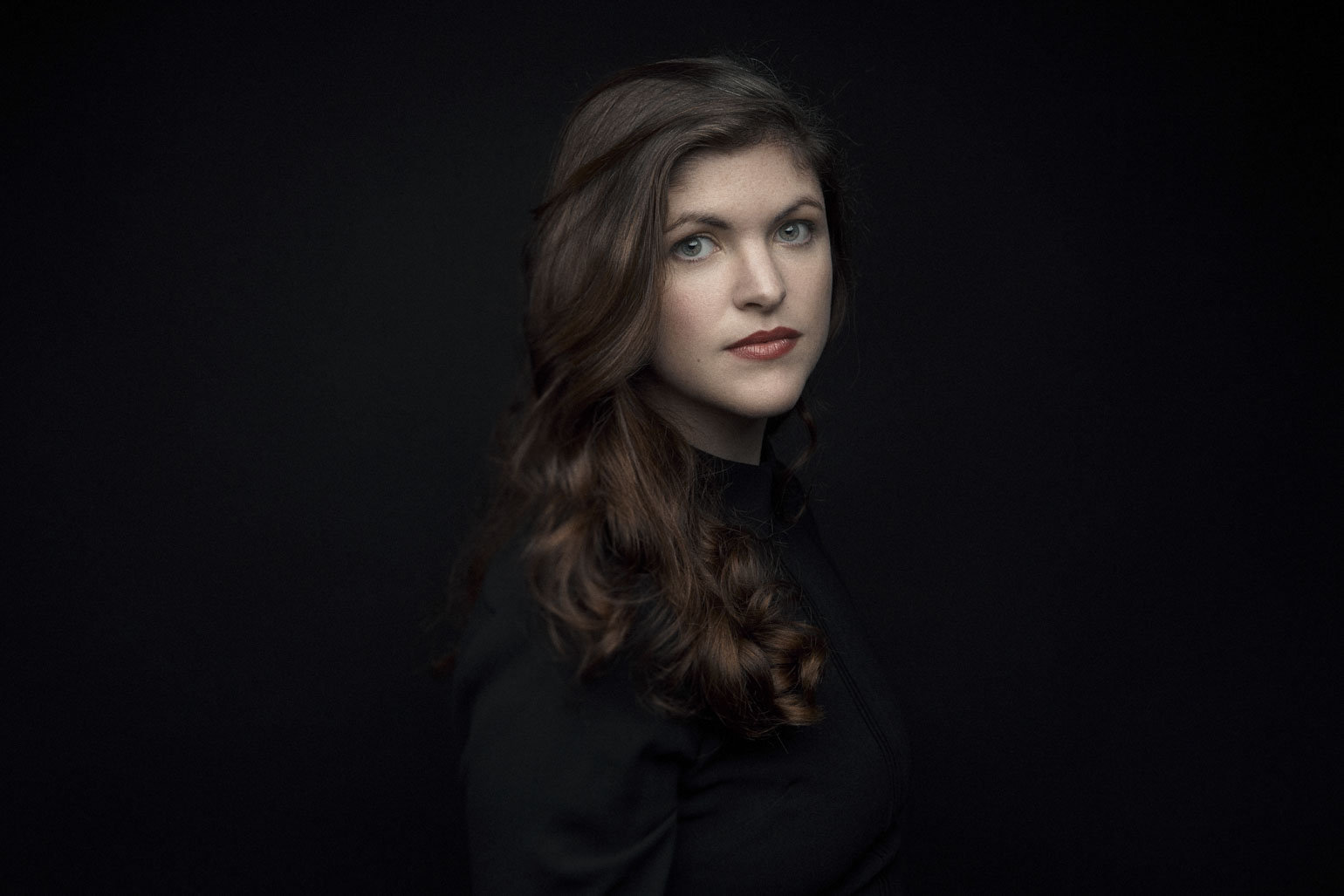 
How does a typical William & Mary person become the writer and actor for one of the best podcasts of 2016 about atypical therapy patients with supernatural abilities? Like many William & Mary alumni, it came from its creator’s drive and desire to learn. When Lauren Shippen ’13 graduated from William & Mary with a degree in music, she packed up her car and traveled cross county with her college roommate straight to Los Angeles. After spending time working for an agency, Shippen longed for the intellectual challenge of her four years at William & Mary. She dove into acting classes at The BGB Studio and found a learning environment that encouraged and advocated for their students to be stewards of their own careers.

Shippen first acted in web series with fellow classmates from UCB and realized the huge financial undertaking of that type of creative output. She then began vlogging and listening to podcasts, including fictional series like the popular and award-winning, “Welcome to Night Vale.” Shippen continued to look for inspiration when one day stuck in LA traffic at the corner of Santa Monica and Harper, Shippen suddenly imagined the character of Sam, a time traveler who has a therapist named Dr. Bright. The floodgates opened and after one year of the characters “talking in her head,” Shippen brought together her actor friends to begin “The Bright Sessions.” The fictional podcast series follows a group of patients, each with a supernatural ability and their therapy sessions with the mysterious Dr. Bright.

There was not a tipping point, but rather several waves of momentum that led to the success of the “The Bright Sessions.” After the end of Season 1, Shippen’s podcast was posted on a Reddit page as a recommended podcast for fans of “The Black Tapes,” an iTunes best of 2015. Next Jeffrey Cranor of “Welcome to Night Vale” tweeted that he was listening to “The Bright Sessions.” Then, while traveling to London with fellow castmate, Anna Lore, Shippen and Lore learned that “The Bright Sessions” would be a featured podcast on iTunes. “The Bright Sessions” now has over 5 million downloads, was named one of the best podcasts in 2016 by iTunes, Wired, Popular Science and IndieWire, and has won seven Audio Verse Awards in five categories.

Shippen’s passion went from part-time to professional, and now finds little time to listen to her favorite podcasts because she is working full-time creating an amazing one! Shippen also gets to work with another fellow W&M alumnus, Evan Cunningham ’16. Cunningham is a composer for “The Bright Sessions,” and was a fellow singer with Shippen in Double Take, W&M’s co-ed a cappella group. Shippen and Evan are living an atypical William & Mary alumni life in LA and remind each of us to #staystrange.

Why did you choose William & Mary?

When I was college hunting, I knew I wanted to go to a liberal arts school that was small but not tiny — something in the 3k-6k range for the student body. Ideally, I wanted somewhere with an active theatre department and an a cappella community. A few different colleges fit the bill for these requirements, so campus tours ended up being the deciding factor. The moment I stepped foot on those brick pathways, it just felt right. I applied early and the rest is history!

I think I miss the people the most — I forged some of my closest and most significant friendships my very first week there and joined various clubs and groups that gave me so much. The thing that I love about William & Mary is how passionate everyone is about what they do. Everyone has unique interests, but the level of enthusiasm is universal. While I've found an amazing community of people in Los Angeles, I miss living in that every single day. Also, if I'm completely honest, I really miss singing a cappella.

Easily the thing I miss least is the weather. Williamsburg is a gorgeous place but, boy, that swamp season is rough.

What “Bright Sessions” character is a TWAMP? Should Caleb apply to William & Mary? Should Sam time travel to 1693?

Sam and Adam are probably the most TWAMP-y. They both have a hunger for knowledge and a level of enthusiasm that they sometimes can't keep in. I would love for either Caleb or Adam to apply to William & Mary — I think it would be a fantastic fit for Adam. For Caleb, he might want to stick closer to home, but I think he'd also be able to find a great community there.

There's actually a moment I had in Williamsburg once that I think about often when I'm writing for Sam. I was a music major, which required hours of listening to long works of music. I found that if I listened in my dorm or the library, I would inevitably get distracted by my computer or something else. So I would take long walks through Williamsburg in the evening to do my listening homework. I remember one night I was walking along DOG Street listening to a symphony from the 18th century. I was completely alone on the street and my eye was drawn to the window of one of the taverns. The tavern had closed but the staff was in the dining room, some of them relaxing and having a drink, others putting the chairs up on the tables. They were all dressed in colonial garb and drinking out of the tavern's tankards and I stood there, watching them and listening to a piece of music that was written around the time these people were re-enacting. It felt a bit like time travel — the music, the emptiness of the street, the complete lack of anything from the 21st century (other than electricity). And the staff didn't notice me so I was just standing there, an unseen observer. It was easy to let my imagination believe I'd momentarily stepped back in time. So in some ways, Sam has already traveled to Williamsburg.

Who is your favorite character? Why?

I don't know that I can pick a favorite character — I love all of them for totally different reasons. Sam will always have a special place in my heart because of how close she is to me, I adore how big Caleb's heart is, I love peeling back all of Dr. Bright's layers, and Damien's snark is some of my favorite stuff to write. But my current favorite is probably Mark. He's been a character in my head for so long that actually getting to write him has been so much fun. He's surprised me and kept me on my toes in a way that's really exciting — I'm constantly discovering new dimensions to him.

What atypical power would you want to have? Why?

Oh gosh, that's a tough one. My answer changes all the time. I do think telekinesis would be pretty awesome. It wouldn't be as disruptive as a lot of the other powers and it'd be nice to wave my hands and have my apartment clean itself.

Do you write the entire season, episode to episode, or does it evolve with the characters and dialogue?

It's a mix of a few things. I usually start by mapping out the season — starting with the season arc, then the half season arcs, then the arcs over a few episodes. Then I start writing episode by episode, usually in order, though occasionally I'll bounce forward if a certain scene or dialogue exchange occurs to me. But mostly I sit down and have a conversation with myself. Because most of the episodes are two people talking, it's easiest to start at the top and work my way through.

Do you know how "The Bright Sessions” will end?

I don't have an exact ending in terms of last scenes or last lines, but I have an idea of where I want each of the characters to end up emotionally. I'm aiming for a general target and how I get there is always shifting!

What podcasts are you listening to right now?

My absolute must-listen-to always is the “NPR Politics” podcast. I'm absolutely addicted to it. In terms of fiction, I love “Wolf 359,” “ars Paradoxica,” “The Deep Vault,” “Wooden Overcoats,” “Tanis,” “Hello From the Magic Tavern” and “Within the Wires.”