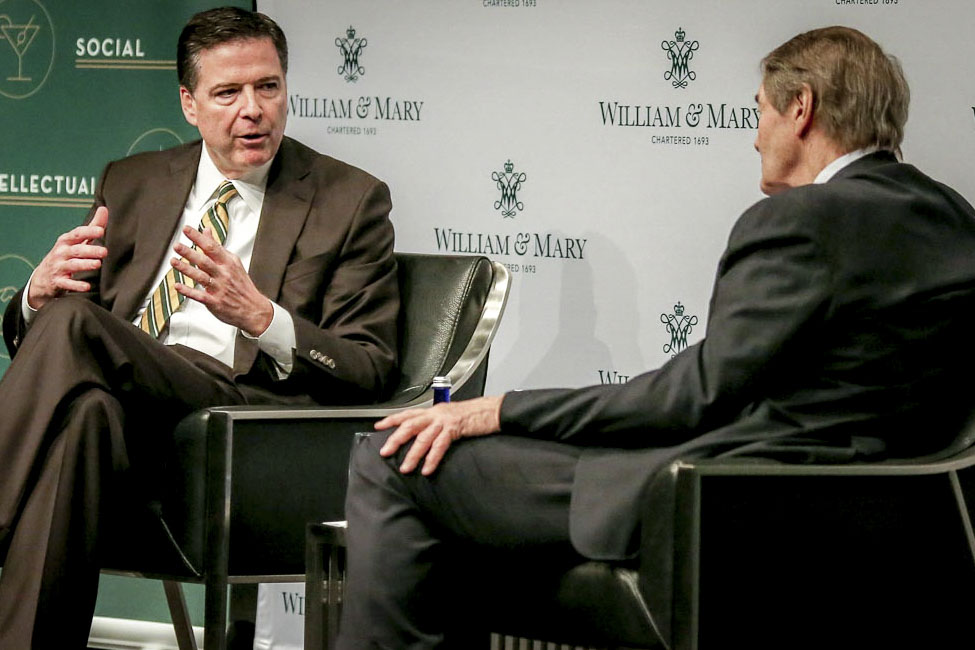 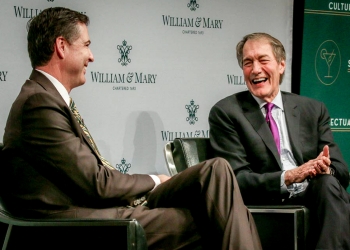 He spoke about the highly publicized issues during an interview at the Newseum in Washington, D.C. in front of a large William & Mary crowd.

A top priority for Comey is ensuring that the agency is striking the right balance between upholding the Constitutional rights of citizens with protecting the nation's security. He provided insight into this delicate balance by answering some tough questions about the 2015 San Bernardino shooting.

Comey said before the shooting that left 14 people dead, his agency was already gathering information about encryption of data on devices. The plan was and continues to be an examination of encryption’s impact on intelligence gathering. Comey said the Apple debate was not about singling the company out as some critics have said; it was simply about getting into the phone to access information related to the attack. It was an incident that spawned a national debate on the tug of war between privacy and security between authorities and civilians.

“How do we reconcile a collision between two things we care about — security on the Internet and privacy and public safety?” Comey said.

Apple refused to open the iPhone of Syed Rizwan Farook and the case was sent to court, but in March the Justice Department dropped its court order against the company, saying investigators had found a way to access the information without the Apple’s assistance, according to the Washington Post.

“We weren’t asking them to do something, that at least in our minds, was all that fancy, but they had a right to say that and made a legal argument that the company can’t be compelled to offer that kind of assistance to support a search warrant,” Comey said.

Rose followed up by asking Comey if Apple had a legitimate fear that if they granted the search warrant they would spend time answering similar requests across the country. Comey responded by saying, in part, they had legitimate concerns but the issue is still about protecting the country.

“This shadow is falling across our work and that’s what I mean about this collision...the notion of privacy is great, but here’s the problem,” Comey said. “The notion of absolute privacy would be new to America. We’ve never had that.”

The interview shifted later to race relations and law enforcement in the U.S. Comey said that more understanding from both sides — the police and the community — is needed. While controversial encounters between law enforcement and the public is not new, Comey said that devices used to publicly share violent encounters has changed the relationship between police and the community.

“We’re not against people videotaping police or capturing those images,” Comey said. “We understand it will make us better and it has to drive us to understand the relationship is strained and broken by virtue of what people are seeing and you [law enforcement] have to get in there and work to fix that.”

Comey said that he is trying to get communities and police to understand how life is experienced on both sides.

“A 19–year-old young black man walking home from the library and seeing one of us coming up to him, how is he experiencing us and the world given his life experience… and when somebody pulls you over at midnight and you happen to have tinted windows, why that police officer who might have a young child at home has adrenaline coursing through them… trying to get both sides to see each other more clearly, as unscientific as that sounds, has to be part of the solution,” Comey said.

During the conversation, Comey imparted an important lesson that struck a cord with the William & Mary audience; it is a lesson that he teaches all of his agents at the Bureau. He said that one of the most important things for his agents to learn is what humans are capable of when they are not constrained.

To do so, Comey requires new agents to visit the United States Memorial Holocaust Museum and the Dr. Martin Luther King Jr. Memorial. Both to remind them of abuse of power — in the Holocaust case, it was the abuse of power that led to millions of people losing their lives and in the King case, the excessive wiretapping that occurred.

“It’s designed not to tell them what to think, but to make them think, which was one of the things William & Mary did so well for all of us," Comey said.