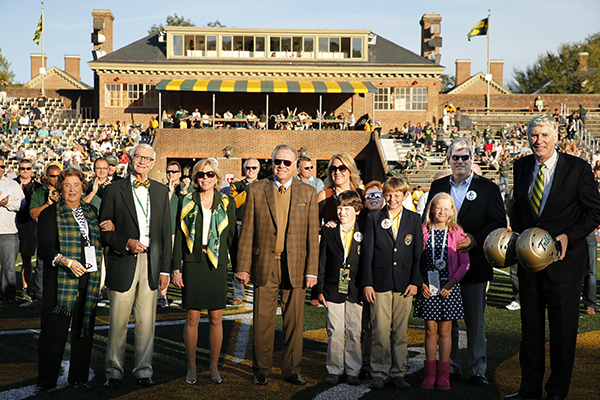 
During the Tribe football game on Oct. 29, the William & Mary community came together to celebrate the newly renovated Zable Stadium during the halftime ceremony.

Over the past year, the 81-year-old stadium has undergone substantial renovations to turn it into a state-of-the-art facility for student-athletes and for Tribe fans to gather to support their team. This has been possible, in large part, due to significant gifts from the late Walter J. Zable '37, LL.D. '78, Smith and the McGlothlins. All gifts were made during the leadership phase of William & Mary's For the Bold campaign and have enabled the university to bring the stadium into the 21st century.

"Hunter, Walt, Jim and Fran all saw a need and all came to the rescue. Now we have a Zable Stadium revitalized, renewed and ready for the next 100 years," said William & Mary President Taylor Reveley.

Although the stadium has added lights, a turf field and a video scoreboard over the years, most of the facility was in need of modernization. Thanks to gifts from these generous donors, the school added a new upper deck, suites and an up-to-date press box. The renovations also include the addition of new restroom facilities, an upgraded sound system and additional concession and retail locations.

"We have always been passionate about William & Mary football, and with a great renovation to our stadium, we're even more proud to be a part of the Tribe football family," said James McGlothlin. Fran echoed those sentiments, "It was so wonderful to be on the field during halftime with generations of Tribe football captains - including those who led the team when Jim and I attended the university - and experience firsthand how our gift has really energized all of the fans attending the game at Zable."

William & Mary Athletics Director Terry Driscoll says the feeling of pride and community fans get when they enter Zable is now more enhanced by the stadium renovations.

"Now when people come into the stadium, they will notice that the whole experience has been greatly elevated because of these extraordinary investments in our football program," said Driscoll. "That's what I'm most excited about. That people can come to be proud of being part of the William & Mary athletic family and being very proud of what goes on around the stadium and on the field."

The project broke ground in the spring of 2015 and was wrapped up before the start of the 2016 season. The renovation places Zable Stadium in line with the recommendations of the Committee on Competitive Excellence Report, which states that high-quality facilities are necessary to provide Tribe athletes with the best environment for competitive success.

"Zable Stadium has always been a beautiful campus treasure, but now it truly is a state-of-the-art facility for our student-athletes to compete at the highest level, and for the Tribe faithful to gather as a community," Smith said. "I'm thrilled to support William & Mary and this wonderful stadium project."

The new grandstand in the upgraded stadium features a sizable plaque that reads, "Smith-McGlothlin Grandstand" in a fitting tribute to these donors who have contributed significantly to the renovations. To learn more about the impact of their gifts, watch this video.

"When you see people trying to upgrade their facilities for the teams playing in them, it shows that they believe in the team and believe in what we can potentially do," said Tre McBride '15, a former W&M football player and now a wide receiver for the Tennessee Titans. "It's a good investment."

The William & Mary community believes that such a prominent landmark on campus should reflect the university's status as one of the country's top institutions.

According to Driscoll, the stadium repairs and renovations were overdue. With the improvements, the university hopes to enhance the game day experience for all involved.

"I've been watching the progress on the stadium all through the summer, and now that we can finally go in it, I have to say the stadium itself is gorgeous," said Laura Anderson '18. "Not only does it create an exciting atmosphere, but it has definitely drawn more fans in this season. The win over Homecoming was incredible and even more so because we were able to do so in the new Zable!"

John O'Connor, a sports writer for the Richmond Times Dispatch, has been covering William & Mary football since 1986. When he packed for coverage of a W&M home game in past years, he always brought three things that he never took to any other stadium: sunglasses, a hat with a visor and a seat cushion. O'Connor says the sun was difficult in William & Mary's old press box, as were the low seats. There was also lack of space and lavatories.

"Zable Stadium was historic and quaint. It was not modernized, as most other CAA stadiums are, until this season," O'Connor said. "The upgrades bring W&M to the level of its opposition, key in recruiting and fan comfort."

In addition to the investments of Smith, the McGlothlins and the Dawkins family, Tom Watkins '74 and his wife, Wendy, also contributed to the stadium's improvements and named the first-level concourse. Cliff Johnson '65 and his wife, Mary Ann, made a gift in support of the renovations and have named the president's suite.

"Zable Stadium has undergone a significant and impressive transformation, thanks in large part to loyal alumni who have played a vital role in bringing the Tribe game-day experience into the modern era," said Matthew T. Lambert '99, vice president for university advancement. "The entire Tribe family will greatly enjoy the upgraded stadium and we cannot thank Hunter, Jim, Fran, John, June, and the Watkins and Johnson families enough for their generosity."