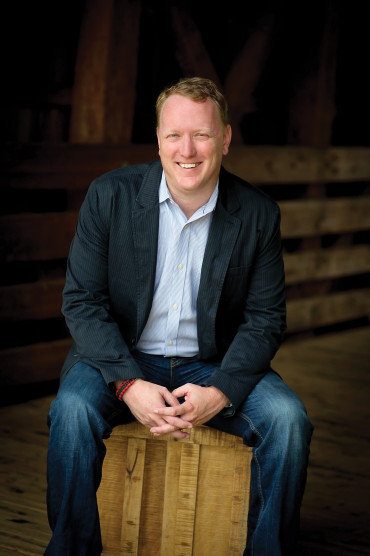 The following story originally appeared in the summer 2016 issue of the W&M Alumni Magazine.

Jay Busbee '90 comes from a long line of William & Mary alumni. His grandmother attended before him, as did his father and sister. "My father said I could go wherever I wanted, but he would only pay for it if I went to William & Mary," jokes Busbee.

It seems Busbee knows a true family legacy when he sees it. He now discloses a behind-the-scenes look at the Earnhardt family in his latest book, Earnhardt Nation: The Full-throttle Saga of NASCAR's First Family.

"It was always a pipe dream to write about sports," says Busbee, an avid athlete and sports fan. "I played football and ran in high school. I also played basketball when I was younger and ran a few marathons."

But the dream was always to write. "It was pretty clear early on that if I was going to stay involved in sports, it was going to be something other than on the field," says Busbee. "I had fun doing it, but I was never any kind of superior athletic talent."

It would seem what Busbee thought he lacked in athletic talent, he made up for with writing capability tenfold. In his time at W&M, Busbee wrote for the Flat Hat as a sports editor and acted as the fiction editor for the William & Mary Review. Putting his studies in English to good work, he contributed to a few other William & Mary publications, including the William & Mary Alumni Magazine. In a favorite W&M article, Busbee debunked a number of myths about the College, about the tunnels underneath Old Campus and other stories. "It's fun to dive into the history of the College because there's so much to work with there," he says.

His love of family, sports, history, and even debunking myths comes together in Earnhardt Nation, and it all started with a blog.

"In 2008, I finally got a break and started working for Yahoo's NASCAR blog. It was a time when blogs weren't that big of a deal." For Busbee, getting in on the ground floor was a matter of being in the right place at the right time and using his knowledge of sports in the South to his advantage. "I knew I wanted to be involved with Yahoo, and I knew a bit about NASCAR. They didn't have anyone who had any experience with NASCAR, so I made the pitch to the editor who was hiring, and he brought me onboard. So far, I've managed to hang on."

In the new environment of blogging and self-publishing, Busbee used his passion for news and information and made it his own.

"I've always been a news and information junkie and enjoy the opportunity to take news as it happens and put my own spin on it," he says. "With print, that wasn't always something I could do."

He enjoys the fast-paced environment and, while he laughs off some of the comments on the blog, he does appreciate that readers can access his work online every single day.

"But the downside of blogs is that you don't have anything tangible to hold in your hands," he says. For Busbee, writing the extensive Earnhardt story was a way to combine his many interests and ultimately publish in print.

"The popularity, the intensity, the drive, that all interested me, and there had never been a book done on all three generations of Earnhardts, so I saw that opportunity there."

A story of sports, family, competition and the will to win, Busbee found personal interests in the Earnhardt legacy.

"[Earnhardt Sr.] was an absolute titan of the sport. Everyone either hated or loved him, but you couldn't deny the guy's talent. His father, Ralph Earnhardt, was equally as impressive. He gambled his entire life and his family's life on his ability to race - and it paid off."

Busbee offers the new book as a perfect introduction to NASCAR and the culture of sports in the South for any reader who enjoys a good story. "Fundamentally, it's a family that represents the classic American dream - making something of yourself and making an empire out of your own will."