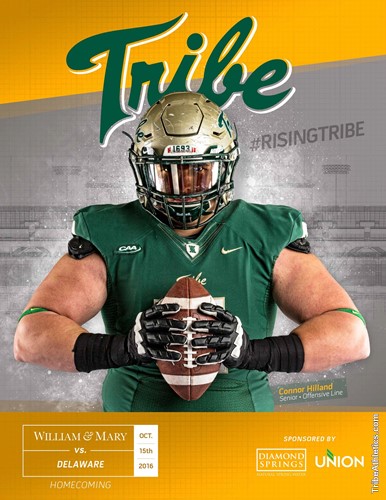 
The William & Mary football team will return to action when it hosts long-time rival Delaware for Homecoming at Zable Stadium on Saturday at 3:30 p.m.

Tickets can be purchased at TribeAthletics.com or by calling the ticket office at 757-221-3340. The game will be streamed online for free in HD on TribeAthletics.TV.

Although W&M (2-4, 0-3) is looking to snap a three-game skid, it is coming off one of its best performances of the season in a narrow setback at No. 7/6 James Madison last Saturday. W&M held the Dukes to nearly 17 points below their scoring average and had a red zone opportunity to win the game late in the fourth quarter.

The Tribe currently boasts one of the country’s top pass defenses and ranks seventh nationally in fewest passing yards allowed (161.2). Additionally, W&M has recorded at least one interception in 13 of the last 15 games dating back to last season.

Offensively, senior running back Kendell Anderson is coming off a pair of outstanding performances and is averaging 158.5 rushing yards per game in the last two contests.

After opening the season with back-to-back victories, Delaware is currently on a three-game losing streak and enters Saturday’s game with a 2-3 record overall and a 0-2 mark in conference play. The Blue Hens boast one of the conference’s top rushing attacks and rank second in the CAA with 271.6 rushing yards per game. However, Delaware has been unable to generate much offensively through the air and are averaging a league-low 79.0 passing yards per game. Running back Wes Hills currently leads the conference with 133.2 rushing yards per game, while he is averaging 10.2 yards per carry with five touchdowns.

Although W&M has won five of the last eight meetings against Delaware, the Blue Hens control the all-time series, 23-17. However, W&M owns an 11-10 edge in games played in Williamsburg.

A key to the Tribe’s last five victories against Delaware has been its defense. In addition to allowing just 13.2 points per game versus the Blue Hens in those wins, W&M has surrendered just 47.6 rushing yards per game. Additionally, W&M held Delaware to negative rushing totals in two of those contests (2009 (-2); 2013 (-35). In those five wins, the Tribe has also totaled 23 sacks for an average of 4.6 per contest. Conversely, W&M has allowed 262.0 rushing yards per game versus the Blue Hens in its last three losses in the series.