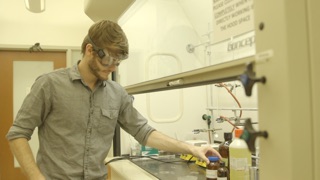 When he returned from two deployments to Afghanistan, Army Ranger veteran Tim Beck ’17 had been planning to lay low and focus on his education.

“I was the sort of veteran who kept to himself and who didn’t talk about my military service very much,” says Beck. “I wanted to stay outside of that niche because I was trying to redefine myself.”

Today, Beck is recognized as a distinguished campus leader and the inaugural recipient of the Patriot’s Dream scholarship, a privately-funded $1,000 award for an undergraduate student veteran. As the leader of the Student Veterans of William & Mary, Beck has not found himself laying low at all — instead, he’s helping connect student veterans with the services that are available to them and improve their ability to be successful on campus.

“The veteran population is a subset that is very independent,” he says. “We don’t like asking for help unless we absolutely need it, and we don’t like being on the front-and-center stage unless we’re put there to help other people.”

Beck himself had never planned for a civilian life. He aimed himself at military service at age 11 after the events of Sept. 11, 2001, and did not waver even if it had a detrimental effect on his academic career. He joined the Army planning to spend 20 or 30 years as a soldier.

“I wanted to get to the highest level in the military that I could possibly achieve,” he says. When he became an Army Ranger with the 75th Regiment, 1st Battalion, he felt like he achieved that goal. But he wasn’t done striving.

“My experiences in the military, specifically in the war, showed me that there was more that I could do than just be a soldier or just be a Ranger,” he says. “My longing to help others outside of my own definition of what I was capable of started to tug at me.”

He finished his tour of duty and enrolled at Thomas Nelson Community College, where his self-identified “less than ideal” academic record could be improved. Even before he transferred to William & Mary, he was on campus meeting with professors and developing the sorts of mentorships that had helped him through his Army service.

“I found that William & Mary was really adept at being able to push me to become a better student than what I thought I was previously capable of,” says Beck, who is majoring in health science with a minor in biochemistry. “The resources that William & Mary has, in my experience here, they’re very good. They’re somewhat spread out and somewhat unknown to many of the student veterans on campus, so a lot of the work that I’ve done is try to connect the people who have the needs with the people who have the provisions.”

Many of those provisions come through the Dean of Students Office within Student Affairs. Ben Boone ’07, M.Ed. ’09, assistant dean of students, is focusing on enrollment and transfer student services and is the primary contact for student veterans like Beck.

“William & Mary enrolls students from all walks of life, but our veterans come to campus with a different journey than most,” Boone says. “It’s important to make sure resources and opportunities are accessible for all of our students. Regardless of their journey to the university, we want our students to flourish and grow here.”

Since student veterans have starkly different experiences and are often several years older than their traditional student counterparts, there can occasionally be a disconnect between the two groups, says Beck. Adapting to academic life is a challenge for all William & Mary students, but the added factors of re-integrating with the civilian population, socializing with younger students and keeping up with additional adult responsibilities can be taxing.

In addition to being a lab TA and an important member of President Reveley’s Military and Veterans Working Group, Beck has helped a veteran in his late 20s find a single dorm room after “dissonance” with his late-teenage roommate became a source of stress. The Student Veterans of William & Mary have formed an intramural team as well as a trivia team to help veterans socialize with each other and fellow students. Beck opened the group up to non-veterans, and now there are several students with no direct military connection joining them for events.

“Having them involved with our group has been very beneficial to the veterans — sort of relearning the language if you will, and the culture that we have here in America,” he says. “They’re helping to polish up those social skills that they will need for their professional business lives, or whatever lives they have after college.”

“Tim is a perfect example of a William & Mary student leader,” says Dean of Students Marjorie Thomas. “We were so proud to award him the Patriot’s Dream scholarship, and look forward to seeing what comes next.”

What’s next? Beck came to William & Mary planning to be a physical therapist, but expanded his outlook when he finished an internship at a physical therapy clinic in Williamsburg. This fall, he’s interviewing at medical schools to become a doctor.

“The challenge of becoming a physician echoed what I had pursued in the military,” says Beck. “It was sort of the same track that I’ve always hunted down: If I’m going to do something, I’m going to do all of it.”