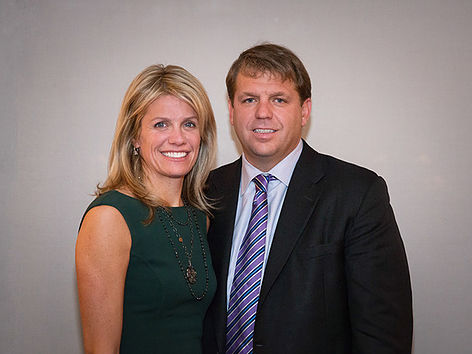 The Boehly Center for Excellence in Finance at the Raymond A. Mason School of Business was established in 2014 by a generous multi-year gift from Todd Boehly ’96 and Katie Garrett Boehly ’95.

Photo courtesy of the Boehly Center for Excellence in Finance


After leaving the Theater District, we immediately find ourselves walking south into the heart of Times Square, lit up in LEDs and neon. Visited by over 50 million tourists per year, Times Square is rich in costumed Elmos and naked cowboys, wide-eyed guests snapping pictures while solicitors shout something about comedy shows. A fair passel of the world population watches the ball drop on New Years’ Eve every year, many of them having grown up watching Dick Clark count down from 10 with his smooth voice and earmuffs. Todd Boehly ’96 could tell you something about the logistics. After 15 years with Guggenheim Partners — a world leader in financial services with over $240 billion in assets under management — Boehly stepped down as president in January to focus his energies into his other holdings, including prime media assets such as Dick Clark Productions, Billboard, and Hollywood Reporter. In addition to being one of the five primary partners of the Los Angeles Dodgers and co-owner of the real estate company Cain Hoy, Boehly is also chairman and CEO of Eldridge Industries, “a holding company that owns, acquires, and operates a variety of private businesses” while making use of Boehly’s vast investment knowledge.

While that partial résumé sounds high-minded in the extreme, I can tell you that a writer can interview a hundred people over the course of countless hours without being asked about his day. Todd Boehly is the sort of person who will ask you about your day while listening thoughtfully to the answers. Boehly remembers his own start in New York, looking up at his six-story walkup. “‘Wow, look at this place,’ I thought. I used to wonder, ‘How does the sewer system work given all these people?’ and ‘How does the plumbing actually work?’ It’s an amazing, energetic place.”

While finance is clearly Boehly’s passion, his attention to people sets him apart. “One of the things I believe in very much is making sure that people get recognition and find rewards beyond just the financial,” he says. “A lot of leadership positions are rewarded chiefly by financials. Richard Branson said it very well: ‘Train people well enough so they can leave, treat them well enough so they don’t want to.’ Between a combination of education and recognition — if you’re arming people with those two things — then you are going to be extremely competitive as a leader because both of those things are underrepresented in most of the environments out there.”

Boehly credits William & Mary for being his first exposure to leadership and finance. He arrived at the College with an eye toward being a doctor or a philosopher, but he was instantly taken by the modeling exercises and different studies on businesses he was asked to do in his finance class. “My professors put me in a position to enjoy school because it wasn’t all hypothetical and could be applied in the real world,” he says. “It was a big moment for me. It helped me engage and enjoy academics more than I had at any other point.” Boehly joined Lambda Chi Alpha and met his wife, Katie ’95. The couple would later give back to the university by funding the creation of the Boehly Center for Excellence in Finance.

“One of the things I’m focused on with the finance center is figuring out how to take real-world problems and apply them to an academic environment to try to develop solutions,” he explains. “Some of the biggest issues are the conversations that aren’t being had. If you look at where debt balances are in the U.S., you have to wonder if the country is in the position to withstand massive interest rate rises. Trying to figure out how to brainstorm and solve the biggest problems in the world with William & Mary’s support is a win-win because you have college students who are extremely well-placed to study these real-world examples. The professionals have chores every day and can’t divert time to these sorts of things, as much as they’d love to. Setting them up in William & Mary’s environment is ideal because they have the chance to think and work on these problems while gaining some necessary expertise since problem-solving is the biggest skill out there.” For his part, Boehly is happy to provide an ear. “The value in any conversation is really all in the listening. I spend a lot of time listening.”

New York City, 2016. A city of over eight million people swelling by the hour, moving and evolving at thought’s speed in the manner of well-dressed, itinerant bees. They move anonymously with their fears and hopes, racked by political concerns and financial burdens and rising sea tides that threaten to capsize Manhattan into the Atlantic, not unlike an isle of myth. Sometimes we question the value of a liberal arts education.

Sometimes we look at crumbling political systems and ecosystems and faulty systems of human thought and wonder if there is anyone who can light the way. But there is a reason that grand statue in the harbor, that one calling out to the tired and the poor and the huddled masses, carries her tablet and lifts aloft a 225-ton torch. That light from the sympathizing French represents an inheritance being passed from the disparate systems of enlightened Europe and Africa and greater Asia, a harmony passed from parent to child and teacher to student, embodied in the works of the grand luminaries who came before.

The Greek mathematician Pythagoras began by teaching his students the concept of the monad, a unit of one that contained within it the many. And from there he taught the dyad, two points indivisible by merit of a common thread — the way a tragic hero’s strength may hint at a fatal flaw or the way two diametrically charged particles can strike a spark to light a bulb. And from there he conceived of a harmony in which musical scales mirrored not only planets but vowels and the greater chain of evolving bodies. And this measured harmony has something to do with why Plato tells us that the final thing we learn to intellectualize is goodness.

So as Yancey Strickler retires from his day to watch basketball with his wife and young son, there is hope that his starter will add beauty to this world through a book or a song, a theatrical production all in lights. And as Beth Comstock moves anonymously across Central Park, there is hope her understanding of forms will manifest in energy connections and healthcare solutions, a better way to light a bulb. And as Laura Balcer takes that bulb to shine a pen light into the eye of a weary patient, there is reason to believe that light will shine beyond that treatment to guide her students and colleagues as they follow in her careful steps. And while Ken Himmel double-checks the schematics on the lighting for Hudson Yards, his attention to detail is being eyed by a new generation that benefits from his years of hospitable experience. Todd Boehly may cheer loudly as an electric ball drops or as a Dodger batter sends a home run into the lights, but he will also listen quietly and attentively as the Boehly Center educates the sort of young minds that will better illuminate the globe. And William Ivey Long, of course, will continue to create costumes that glint of history and of story, because sometimes the people need to dance. Sometimes in New York, as we stare up at our six-story walkup, the lesson seems to be that victory is in the dog-eat-dog flight to the top of the ladder. But the lesson — if these leaders are any proof — is that the measured guide we trust most for any steep ascent is almost always the one who will reach down a hand and take us with them.


Read more about the other New York City innovators we profiled: