Last time, we began our journey in New York with a visit to Beth Comstock ’82 in Rockefeller Center. (Read Part I here.) Now, we head to Brooklyn.


This story appeared in the summer 2016 issue of the W&M Alumni Magazine. 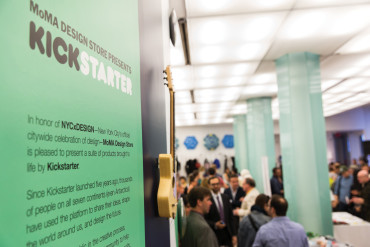 
After a short hike back, we take the 7 Train from the subterranean belly of Grand Central, beneath the swell and chop of the East River into greater Queens, dropping down by way of the G into the Brooklyn community of Greenpoint. Once home to a shipyard and a decaying assemblage of factories, Greenpoint now pulses with the renewed beat of youth. It is where musicians practice their ballads and where coffeehouse poets tremble before microphones. Even the graffiti artists hold a learned pedigree, as evidenced by the occasional Banksy. Greenpoint is also the home of Kickstarter, perhaps the world’s most recognizable online crowdfunding platform. Housed in the former shell of a pencil factory, Kickstarter is a favorite among creative types, with backers supporting over 100,000 projects since the company’s inception.

Of all the CEOs of well-known American companies, Kickstarter’s Yancey Strickler ’00 is in many ways the most unlikely. A self-described “reluctant business person,” Strickler was raised on a farm in Appalachian Virginia, the son of a traveling waterbed salesman who aspired to make it as a country music artist. This love for harmonies rubbed off on the junior Strickler, who began to carve out a life as a journalist and music critic during his time at William & Mary. Not that college life always suited him. “When people are doing one thing, I want to do the opposite,” Strickler laughs. “I think college was hard for me for that reason.”

But as liberal arts colleges owe a great debt to the thought of the Greeks, one instantly recognizes in Strickler the wisdom of the old maxim carved into the Temple at Delphi: Know thyself. While many of his classmates immersed themselves into the more social aspects of campus life, Strickler worked as music director for WCWM, the student-run radio station. He traded music with English professor and former Spiral Jetty frontman Adam Potkay and credits author and Vanity Fair contributor Sam Kashner for helping him make the move to New York City. And while Strickler embarked on a blossoming career as a journalist and editor — writing for noted periodicals such as The Village Voice, New York magazine, and Pitchfork — it was a chance meeting with cofounder Perry Chen that would eventually thrust Strickler into the world of crowdfunding.

Chen was an artist, Strickler was a writer, and third cofounder Charles Adler was a designer. Looking around the New York art scene, it was easy to find a flaw in the system’s design. “In a more traditional model,” Strickler explains, “the only ideas that get through are those that have the potential to be profitable to someone else. On Kickstarter, we very consciously wanted to create a world in which ideas are supported because someone decided they were cool and worth doing.” To date, some of those ideas have been very “cool.” Backers have supported an Oscar-winning film, 11 Oscar-nominated pictures, and 15 Grammy-nominated projects among Kickstarter’s other accolades.

In an age in which hip young founders of promising startups are known to sell big — and quickly — the veritable starving artists did a very curious thing: the trio decided to make Kickstarter a public benefit corporation, which legally bound them to “do good” and to perform a public service. As Strickler puts it, “Business and commerce can be more balanced and bound to what society needs rather than just the maximization of money. In one of his last essays, Adam Smith, the father of the free market, argued that altruism — and not self-interest — is the primary motivator of humanity. The current economic model is lucrative for some but completely destructive to others. I’m interested in a more diverse set of systems. Kickstarter’s system wouldn’t work for Goldman Sachs, but there are other models beyond just maximizing returns — and a lot of those models have the potential to be healthier.”

Like Comstock, Strickler seems to have gained something by way of his unlikely route. “There are some ways in which I see being a writer and being an entrepreneur as being quite similar,” he says. “You’re basically trying to shape a world in both cases. In the world of writing, you’re shaping and measuring a world through verbs and syntax and storytelling, while in the other you’re shaping through people and systems and another kind of storytelling.”